“There is outrage before grief”: Iranian community gathers at Multi-Faith Centre for vigil 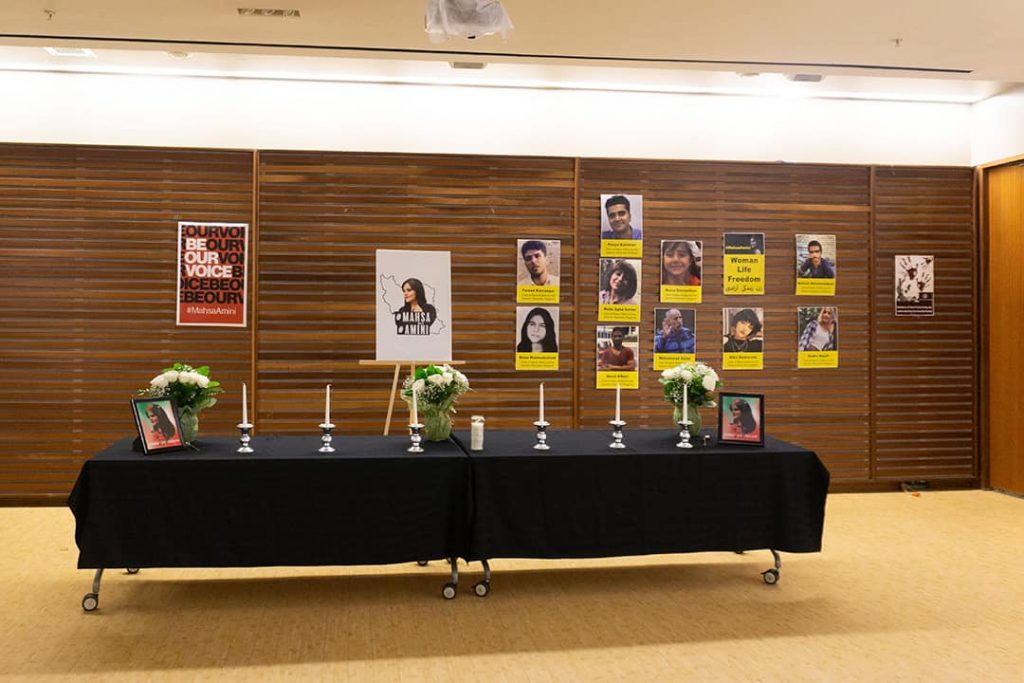 On October 3, approximately 150 members of the Iranian community and allies at U of T gathered on the second floor of the UTSG Multi-Faith Centre for a tri-campus community vigil. The Iranian Association at the University of Toronto (UTIRAN), the Anti-Racism and Cultural Diversity Office, and the Multi-Faith Centre co-organized the event to help the community gather and reflect as widespread demonstrations continue in Iran.

The ongoing wave of demonstrations began after 22-year-old Mahsa Amini died in custody in Tehran, Iran on September 16, after ‘morality police’ arrested her for violating the country’s mandatory dress code. In the weeks since Amini’s death, protests for freedom from the Iranian regime have gained momentum, both within Iran and across the world. In response, the regime has orchestrated a brutal crackdown, paired with internet and social media blackouts that have significantly impaired communication.

In light of these events, senior U of T administration attended the vigil to offer remarks of solidarity and support. Following these speeches, the organizers invited attendees to engage with each other. For the next 40 minutes, members of the Iranian community at U of T came together in a conversation demanding justice and support and expressing their outrage at the situation.

The vigil was livestreamed online for those who could not attend in person. An overflow room displaying the livestream was also available on the first floor of the building.

Remarks from U of T administration

Sandy Welsh, Vice-Provost Students, expressed deep sadness over Amini’s death. She recognized the “many emotions” that attendees might be feeling, and encouraged struggling community members to reach out. “The university is here to support you,” she said.

Kelly Hannah-Moffatt — vice-president, human resources and equity — told attendees that the university leadership stands with them. “Here in Canada, we cannot be complacent. It remains as important as ever for us to speak out and to continue working to protect the very precious freedom to make choices,” she said.

Several days before the vigil, Hannah-Moffatt released a statement addressing Amini’s death and affirming the university’s support for protests and vigils honouring Amini.

Following Hannah-Moffatt’s speech, a representative of UTIRAN led the room in a moment of silence, accompanied by a candle-lighting ceremony.

Finally, Jodie Glean — executive director, equity, diversity & inclusion — expressed solidarity with the Iranian people’s calls for change. “We all have the right to be, to live, to grow older, to walk the streets of our cities or to commute through the streets of our cities [and] of our universities, and be able to make it home to our families at the end of the day.”

“Our fights are inextricably linked. I need not be from the same place or be of the same culture to understand your pain,” Glean, who is from Grenada, added.

Glean closed her speech by opening the floor up to the community. Second-year PhD student Niloofar Ganji — who co-organized the September 22 vigil outside Convocation Hall with U of T PhD student Faraz Khoshbakhtian — led attendees in a chant of “Zan, Zendegi, Azadi: Woman, Life, Freedom” before sharing her thoughts.

“Zan, Zendegi, Azadi” is the Farsi translation of “Jin, Jiyan, Azadi,” a Kurdish slogan with roots in the Kurdish Freedom Movement of the twentieth century. In the early 2000s, the Kurdish women’s movement adopted the slogan, and now, the words have become a rallying cry for the current protests in Iran.

“I did not hear any of those in this gathering. And that’s why I’m not feeling any release,” Ganji added.

The police reportedly beat Amini in the head with a baton and slammed her head into a vehicle. The 22-year-old Iranian Kurdish woman was then taken to Vozara Detention Centre, where she collapsed and fell into a coma before her death.

Iran’s coroner has attributed Amini’s death to underlying illness. However, her father — who caught a glimpse of bruises on her body ahead of her funeral — insists that the police are responsible for her death.

Amini’s death was not the only one that attendees addressed. Several community members showed up to the vigil with signs displaying the names and faces of a dozen other people identified as having been “Killed by the Islamic Republic Regime.” Among them was 16-year-old Nika Shahkarami, whose mother says she died from blows to the head during a late September protest in Tehran. Authorities say Shahkarami died after falling from a tall building.

“We are not grieving, we are asking for justice. You can grieve only once you have justice,” another attendee said, emphasizing that the community had gathered for condemnations and not “candle ceremonies.”

Addressing the event speakers, they added, “We didn’t hear a single word of condemnation from you today. Bring shame on you.”

On October 5, two days after the vigil, U of T President Meric Gertler released a statement condemning “the systemic violations of the rights of women that led to Mahsa Amini’s death.”

U of T and the responsibility of academic institutions

Several vigil attendees demanded action from U of T, emphasizing the power that the university holds as a prestigious post-secondary institution with a generous endowment and extensive influence. According to the most recent Endowment Report, the university’s estimated total endowment value for 2021–2022 was over $3 billion.

“Studying has been a side thought… I couldn’t care less if I failed my next test. My brethren and sisters are dying on the streets to free themselves from 43 years of oppression,” one community member said. They added that, with meaningful support from the university, “We could make a difference.”

According to Iran’s Human Rights Activists News Agency, as of October 16, approximately 240 people have been killed in Iran during the protests, which are still ongoing across the entirety of the country. The actual death count remains unclear because of Iranian authorities’ suppression of information.

Another community member expressed frustration that they had not seen professors acknowledge the situation in Iran. “We work for them. We publish for them. Where are they right now?”

Multiple attendees also made reference to the previous day’s violence at the prestigious Sharif University of Technology in Tehran. The afternoon of October 2, the Basij — a plainclothes militia force — trapped students behind the gates of Sharif during one of several silent student-led sit-ins.

The Basij then opened fire on the students using paintballs and rubber bullets, and violently beat professors who tried to protect students. “We thought they were going to kill us,” Mahan, a 25-year-old engineering student, told the New York Times. According to the Islamic Association of Students of Sharif University, at least 30 students were arrested.

“What happened last night at Sharif was an attack on the whole world of academia,” said event attendee Sara Shariati, who co-organized the October 6 protest at UTSG and is pursuing a MSc in molecular genetics at U of T. “Before it was women’s rights, now it’s also students’ rights.”

In addition, community members highlighted U of T’s specific connection to the violence of the Iranian regime via Flight 752. Iran’s Islamic Revolutionary Guards Corps (IRGC) shot the Ukraine International Airlines flight down via surface-to-air missile on January 8, 2020. The IRGC, while independent of Iran’s army, is a branch of the country’s armed forces.

Among the 176 people who died on Flight 752, there were eight U of T community members, including six students. The crash left no survivors.

Ganji told the room that people from her program had been on the downed flight. “It could be me, standing right here. It could be my boyfriend, standing right there. Any of my friends — any of you guys in this room — any of us could be on that plane. That’s how close it was to us.”

“My grandparents were actually supposed to be on the Ukrainian flight,” another attendee told the room. “They got lucky to be booked on another flight.”

In an email to The Varsity, a U of T spokesperson affirmed that the university “remains deeply concerned about the situation in Iran and recognizes that it is an extremely difficult time for many members of the University community, particularly those with ties to Iran.”

For students from Iran interested in attending U of T while seeking refuge or asylum in Canada, Gertler’s statement confirmed that bursaries will be available via the Scholars at Risk Award Program. He also stated that the Iranian Student Memorial Scholarship Fund, which was established in 2020, will continue to provide financial aid to international students from Iran.

Call for support from non-Iranians

In an interview with The Varsity after the vigil, a student leader from UTIRAN — who asked to be identified only as an UTIRAN spokesperson due to safety concerns — asked for solidarity from the rest of the university community. “Come out, recognize the situation, and understand what the Iranian community is going through at the moment,” they said.

Shariati also called for support from non-Iranians, emphasizing to The Varsity that Iranian students engage in advocacy at significant risk. “I don’t know if I can go back to my country after speaking up,” she said during an interview.

Shariati, who completed her undergraduate degree in global health and molecular genetics at U of T, lived in Iran before she came to Canada seven years ago. “Those are my high school friends, schoolmates, who are dying,” Shariati told The Varsity.

“I haven’t talked to my family for seven days or more, because I can’t contact them. I don’t know who has died, who has lived,” Shariati added, explaining that she cannot step away from the news because internet blackouts make it difficult to receive updates about loved ones any other way.

“I think I can speak on behalf of the majority of the Iranian community that we haven’t slept, we haven’t eaten,” Shariati said. “We haven’t had a moment to even breathe, because there is outrage before grief.”

Due to the nature of the event, The Varsity was unable to obtain the names of some attendees quoted in this article.