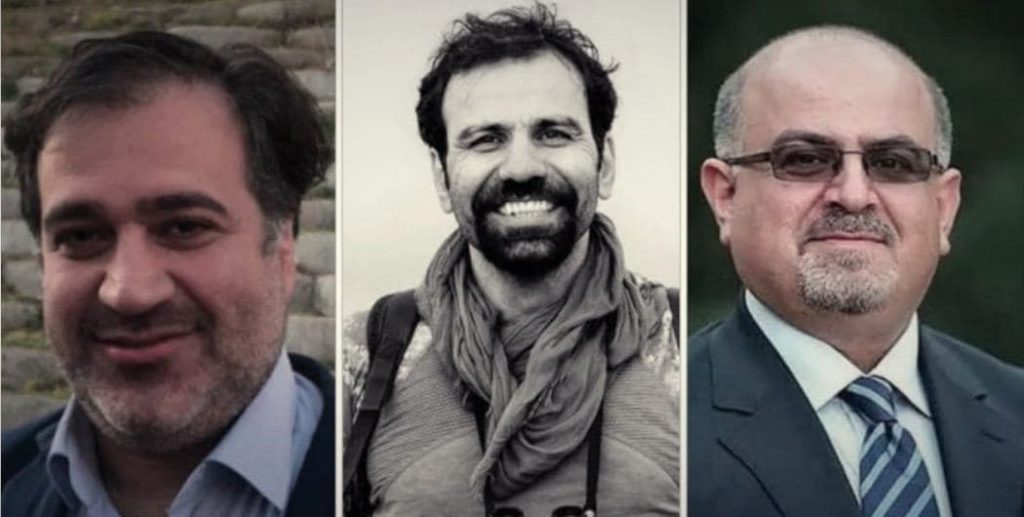 We, the undersigned civil society and human rights organizations, call for the immediate release of prominent human rights defenders Mehdi Mahmoudian, Arash Keykhosravi, and Mostafa Nili, who have been arbitrarily detained by the Iranian authorities since August 14, 2021. We also call on the international community to urge Iran to end these arbitrary detentions in keeping with its international human rights obligations.
On August 14, 2021, Iranian authorities arbitrarily arrested a group of seven human rights defenders, including five lawyers and one journalist, as they prepared to file a complaint against the country’s National Task Force against Coronavirus, including the Minister of Health and other officials responsible for the mismanagement of the Covid-19 crisis. The human rights defenders were arrested at the office of the Tehran Citizens’ Rights Protection Association, a human rights organization they recently established and registered. Two lawyers, Leila Heydari and Mohammad Hadi Erfanian, were released after a few hours. Two other detainees from the group, lawyer Mohammadreza Faghihi and human rights defender Maryam Afrafaraz, were also released on bail on August 29, 2021. The three other members of the group, human rights defender and journalist Mahmoudian and human rights lawyers Nili and Keykhosravi however, have remained in prison for over three months, and are facing an ongoing criminal trial.
In an open letter published by Mahmoudian, Nili, and Keykhosravi in October 2021, they wrote they had experienced rights violations in prison, including being held in solitary confinement for over a month, and they were under pressure to refrain from filing their complaint. Two weeks after their arrest, Iran’s judiciary spokesperson stated that the detainees and bailees were charged with the crime of “disruption of public order.” On November 15, 2021, a group of Iranian human rights defenders and activists inside the country published a statement with over 500 signatories condemning their detentions and charges, saying that their detentions and charges violate fair trial guarantees under Article 34 of the Iranian Constitution and demanding their immediate release.
In late summer of this year, Iran faced its fifth peak of Covid-19 with an official daily death rate that reached over 600 people. With more than 128,000 total deaths since the initial outbreak of the Covid-19 pandemic, authorities have failed to provide details into their plans for domestic vaccine production and repeatedly changed policies on vaccine imports. Iranian citizens have been expressing their anger on social media at the government’s mismanagement, lack of transparency, and unclear vaccination policies during the first six months of 2021. In their unfiled complaint, Mahmoudian, Nili, and Keykhosravi echoed the sentiment of countless Iranians, arguing that authorities who delayed vaccine production and imports were responsible for worsening health consequences of the pandemic.
We, the undersigned organizations, condemn the arbitrary detention of Mahmoudian, Nili, and Keykhosravi, which we believe is connected to, and intended to curb their human rights activities in violation of international human rights law. Iran is a State Party to the International Covenant on Civil and Political Rights (ICCPR), ratified in 1975. This treaty guarantees equality before the law and equal protection of the law as well as legal representation to assure protection of rights. Article 9 of the ICCPR recognizes and protects both liberty of person and security of person. According to the Working Group on Arbitrary Detention (WGAD), deprivation of liberty is arbitrary when it results from the exercise of fundamental rights including free expression and association as laid down in article 19 of the ICCPR and article 19 of the Universal Declaration of Human Rights. Moreover, interference in the work of human rights defenders and lawyers in the form of arbitrary detention results in a violation of the right to a fair trial under article 14 of the ICCPR.
The Iranian government should immediately and unconditionally release the three arbitrarily detained human rights defenders and drop all charges. The Iranian government should also guarantee in all circumstances that all human rights defenders, journalists, and lawyers in Iran are able to carry out their legitimate professional activities without fear of reprisals and free of all restrictions. We furthermore call on the United Nations High Commissioner for Human Rights as well as the member states of the Human Rights Council to raise their cases with the Iranian government at the highest levels, and to pressure them to uphold the rights of these lawyers and human rights defenders.