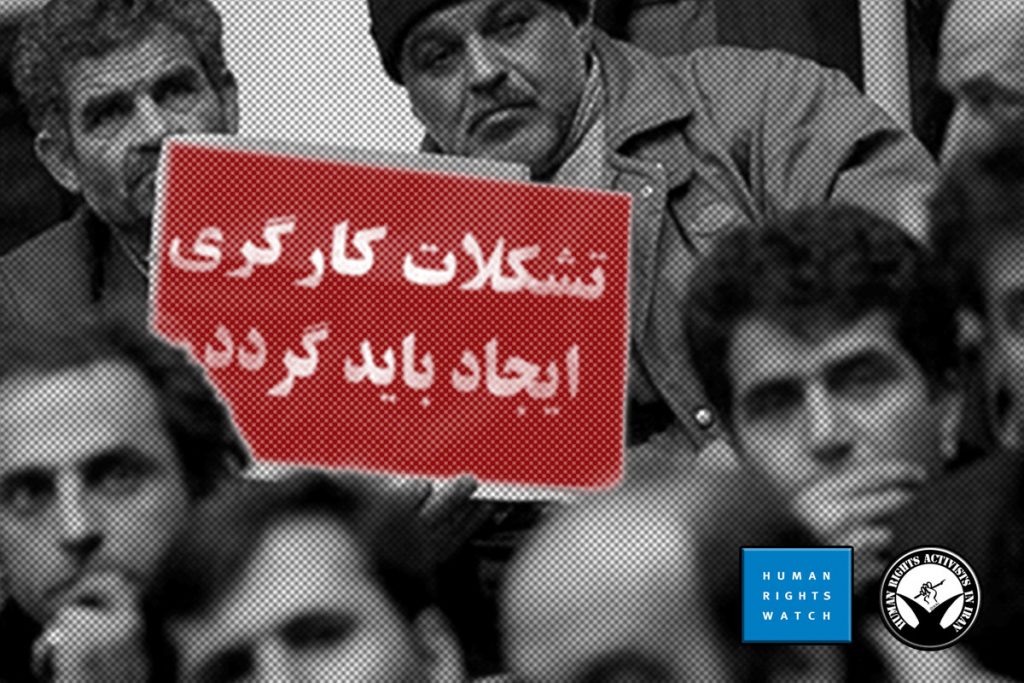 Over the past four years, amid a deterioration of Iran’s economic conditions, labor protests have increased in the country, HRA found in its new Labor Rights Report. Iranian authorities have attempted to repress and silence activists in labor organizations and trade unions who have led protests against low wages and declining living standards. Moreover, a significant number of reported work-related safety incidents and cases of unpaid wages demonstrate perilous working conditions and a further erosion of labor protections in recent years.

“Iranian labor activists have been at the forefront of the struggle for the rights to free association and assembly in Iran, and they have paid heavy price from government repression,” said Tara Sepehri Far, senior Iran researcher at Human Rights Watch. “Iranian authorities should recognize the rights of labor unions and engage in meaningful efforts to address the country’s mounting economic problems.”

Iranian authorities have responded to an increase in labor protests and related actions with arrests and prosecutions of labor rights activists. Over the past 12 months, at least 69 workers have been arrested, and dozens more have been summoned for interrogations, according to HRA. Since March, the authorities have also increased harassment and summonses for interrogation of the active members of the Iranian Teachers Trade Association (ITTA), which has been leading nationwide protests for fair wages for the past three years.

The authorities have detained Ismael Abdi, the secretary of ITTA, for the past five years. Amirabbas Azarm, Mohammad Irannejad, Nasrollah Amirlou, Morteza Seydi, Haleh Safarzadeh, Alireza Saghafi, Arash Johari, Esmail Gerami, and Alieh Eghdamdoost are among the labor rights activists who are currently imprisoned in Iran.

According to Iran’s legal medicine organization data, between 2008 and 2018, 15,997 people lost their lives in work-related incidents. This office reported that 42 percent of workers who died fell from unsecured building ledges. According to Akbar Shoukat, the head of official association of labor unions, construction workers constitute 50 percent of those injured on the job. The Iranian Students’ News Agency (ISNA) reported that a third of those working as construction workers are still waiting for insurance and social security coverage.

According to HRA’s compiled data, at least 45,462 workers are owed delayed wages, an increased from 34,318 in previous year. The public sector is responsible for 76 percent of these delayed wages, especially Iranian municipalities, while the private sector employers owe 14 percent and Iran’s energy sector owes 7 percent.

On March 16, Iran’s High Council of Labor, consisting of representatives of workers, employers, and the Ministry of Labor, set the base minimum monthly wage for the period between March 2022 and March 2023 at 5.679 million tomans (about US$203), a 57 percent increase from the previous year to adjust for inflation.

Under article 41 of Iran’s labor law, the High Council of Labor should determine the minimum wage based on Iran’s Central Bank inflation calculation and adjust to provide for the average family size as determined by the statistical center. On February 5, the High Council determined the minimum monthly costs for a family of 3.3 to be 8.900 million tomans (about $318), higher than the set minimum wage.

The unemployment rate in Iran is about 9 percent, with women’s unemployment almost twice as high as for men, according to official statistics. Data also shows that during the Covid-19 pandemic, more than 177,000 women have left the job market.

Over the past few years, there has been a rise in organized labor protests about declining living standards, delayed wages, and decreased insurance support. Some of these protests have been led by Haft Tappeh Sugar Cane Company workers, the ITTA railway workers, and retirees relying on social security pensions.

In 1996, Iran’s administrative court of justice ruled that employers can use temporary contracts for what are classified as jobs of a “continuous nature.” Since then, labor union representatives have said that there has been a proliferation of temporary contracts that make workers ineligible for the protections in the country’s labor law. On February 2, 2021, Ahmadreza Moini, a representative of the high Islamic council of labor, told ISNA that more than 97 percent of workers are employed on temporary contracts.

Iran’s economy has been experiencing a contraction in various sectors since 2018. Soaring inflation of around 40 percent, according to official statics, has been affecting families’ standard of living across the country. According to the information published by the Statistical Center of Iran in January, the price of items categorized as food, beverages, and tobacco in a family’s purchasing basket has increased by 42.5 percent from the previous year.

Iran’s labor law does not recognize the right to create labor unions independent of government-sanctioned groups such as the Islamic Labor Council. Nonetheless, workers have formed large, independent unions, including the Syndicate of Workers of Tehran and Suburbs Bus Company, Haft Tappeh Sugar Cane Company Workers’ Syndicate, and the Iran Free Workers’ Union.

Article 22 of the International Covenant on Civil and Political Rights and article 8 of the International Covenant on Economic, Social and Cultural Rights protect the right to form and join labor unions. Iran is a party to both of these treaties. Iran is also a member of International Labour Organization (ILO) but has not ratified ILO Conventions No. 87 (Freedom of Association and the Protection of the Right to Organize) and No. 98 (Right to Organize and Collective Bargaining).

“Iran’s ongoing and widespread rights violations against workers and labor rights activists are of grave concern,” said Skylar Thompson, senior advocacy coordinator at HRA. “The sheer number of events documented by HRA over the past several years underlines the urgency for reform in light of a serious lack of sufficient and adequate protections for workers’ rights.”