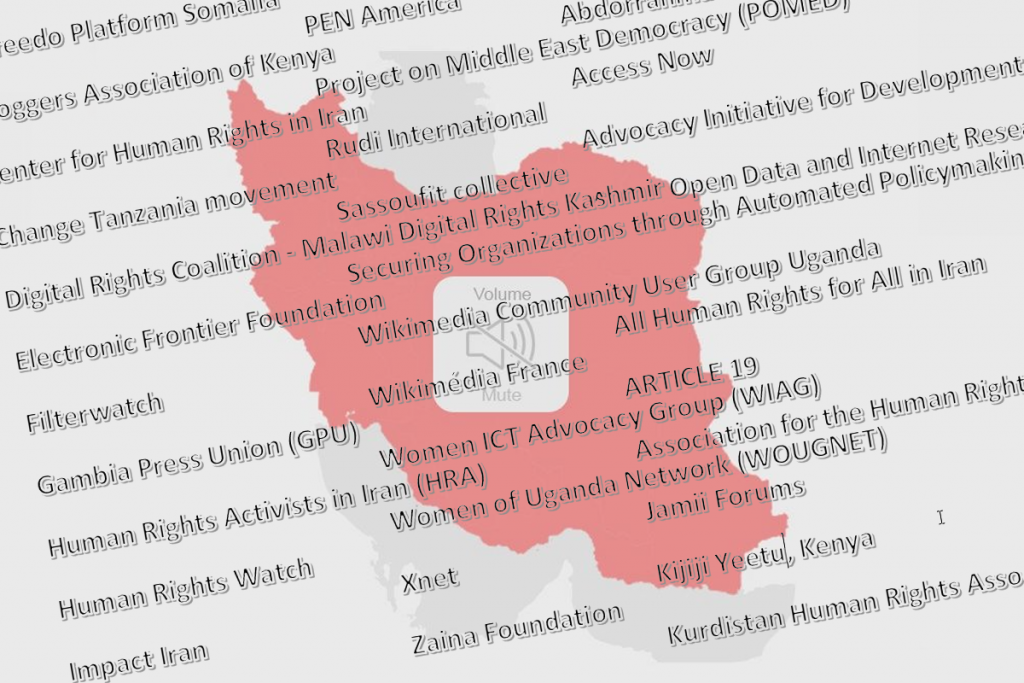 On the eve of a much-anticipated presidential election, the #KeepItOn Coalition has a message for Iran’s authorities.

In their open letter, of which Human Rights Activists in Iran (HRA) is one of the 45 signatory organizations, the coalition emphasizes that freedom of expression online is all the more crucial in states that allow for few physical alternatives.

“The internet, social media platforms, and messaging apps play a critical role in providing a space for expression, deliberation, dissent, protest, and activism in any society, especially in contexts like Iran, where the public sphere is severely controlled and policed, including through criminalization of protected rights such as the rights to freedom of expression and peaceful assembly.”

Censorship is by no means new practice of the Islamic Regime. In the last few months alone, Iranian journalists and activists have reportedly received numerous threats from security forces against criticism of controversial presidential candidate and head of judiciary Ebrahim Raisi. Moreover, several editors and reporters have been summoned by IRGC agents and cyber police for questioning.

The #KeepItOn coalition, comprised of over 258 advocacy and human rights organizations working to end internet censorship, urges the President and Supreme Leader to:

1. Refrain from arbitrarily blocking access to social media platforms, such as Instagram and Clubhouse, and messaging apps, and publicly assure the people of Iran that the internet will remain open, accessible, inclusive, and secure across Iran throughout the election and thereafter

3. Refrain from impeding access to high-quality, secure, and unrestricted internet for everyone throughout the election period and thereafter

4. Order internet service providers operating in the country to inform internet users of any potential disruptions, and to take all reasonable steps to fix any unidentified disruptions likely to impact the quality of service they receive.

Supreme Leader of Iran, President of Islamic Republic of Iran

Nations across the Middle East, and the world, are intentionally shutting down the internet when people need it the most — during elections and important national events. This election, we urge the Islamic Republic of Iran to #KeepItOn.

We, the undersigned organizations and members of the #KeepItOn coalition — a network that unites over 258 organizations from 106 countries that work to end internet shutdowns1 globally — write to urgently appeal to you, the Supreme Leader of Iran and the President of Islamic Republic of Iran, to ensure that the internet, messaging apps, social media platforms, and all other communication channels are open, secure, and accessible throughout the presidential election period, scheduled for June 18 in the Islamic Republic of Iran, and thereafter.

With an alarming pattern of human rights repression, Iran is high on the #KeepItOn coalition’s radar. The world is watching to ensure these rights violations do not escalate further throughout the upcoming elections. For weeks, Iranian journalists and activists have reported on threats from security authorities that criticism of Ebrahim Raisi — head of judiciary and presidential candidate — during the election period will not be tolerated. To drive the point home, the Prosecutor’s Oﬀice of Culture and Media, the Cyber Police, the Islamic Revolutionary Guards Corps (IRGC), and Iranian security forces have reportedly begun summoning individuals and calling editors of newspapers and media sites.

The internet, social media platforms, and messaging apps play a critical role in providing a space for

expression, deliberation, dissent, protest, and activism in any society, especially in contexts like Iran, where the public sphere is severely controlled and policed including through criminalization of protected rights such as the rights to freedom of expression and peaceful assembly. These outlets provide space for communicating, public debate, seeking information on election processes and candidates, advocating for human rights, reporting and documenting events and outcomes, as well as electoral and human rights violations committed in the course of and in relation to elections, and holding governments accountable for their actions — including their promises to the people. Journalists, human rights defenders, election observers, civil society actors, and other relevant stakeholders, rely on accessible internet to monitor and report on elections.

The Islamic Republic of Iran has a long history of disrupting the internet as well as aggressive censorship of social media platforms during elections, the November 2019 protests which were violently repressed, and, more recently, the near total internet shutdown in Sistan and Baluchistan during the February 2021 protests. There have also been numerous reports of internet and social media shutdowns, including Signal and Clubhouse in 2021.

People in Iran have been highly reliant on messaging apps and social media platforms for the sharing of information and opinions during important historical periods. As such, the #KeepItOn coalition appeals to you to ensure that access to the internet and all digital communication platforms remain open and secure at all times including before, during, and after the 2021 elections.

Fundamental violations of international law and standards entrenched in Iran’s laws and structures that govern elections — such as the discriminatory disqualification processes – as well the state’s failure to vet candidates on the basis of their past human rights records and violations have been raised and criticised by human rights organizations, activists, and human rights defenders. These violations must not be compounded by further measures aimed at limiting discussions pertaining to the elections including deliberations that include boycotts or criticisms of Iran’s election process and discussions on candidates’ past human rights record.

It is essential for the government to adopt measures to ensure free access to information and communication platforms, and ensure “just-in-time censorship” is not implemented during moments of heightened political tensions — like elections. We are particularly concerned given Iran’s history of shutdowns and disruptions during elections. The aggressive censorship of platforms and the internet shutdowns following the 2009 Presidential elections are still a harrowing precedent for internet freedom in Iran. The 2013 Presidential elections also experienced pervasive internet throttling as a new and concerning method of internet disruptions. Internet shutdowns or disruptions, as we saw most egregiously following the 2009 election results and throughout protests in 2017/18, and November 2019, may clear the way for the use of violence by state forces against those who peacefully

exercise their human rights. They also cut oﬀ access to vital, timely, and life-saving information, as well as to emergency services, plunging whole communities into fear and confusion.

The Islamic Republic of Iran has ratified regional and international frameworks such as the legally-binding International Covenant on Civil and Political Rights (ICCPR) which provide for the protection and promotion of the rights of freedom of opinion and expression, assembly, and access to information, both oﬀline and online.
UN experts and high-level oﬀicials — including the UN Secretary-General — formally aﬀirm that, “blanket Internet shutdowns and generic blocking and filtering of services are considered by United Nations human rights mechanisms to be in violation of international human rights law.”
Telecom companies must respect human rights
Telecom companies and businesses have a responsibility under the UN Guiding Principles on Business and Human Rights and the OECD Guidelines for Multinational Enterprises to respect human rights, prevent or mitigate potential harms, and provide remedy for harms they cause or contribute to. It outlines, “states should take additional steps to protect against human rights abuses by business enterprises that are owned or controlled by the State.”

Furthermore, telecom service providers operating in Iran, including the Telecommunication Infrastructure Company, have an obligation to uphold and respect human rights by providing quality, open, and secure access to the internet and digital communication tools throughout the elections and beyond. Internet shutdowns — whether in Iran or other countries — must never be allowed to become the new normal, and we encourage Iranian enterprises to integrate these practices for responding to censorship and network disruption requests in all markets where they operate.

As organizations that believe in the power of the internet as an enabler of all other human rights, we assert that unhindered access to the internet, social media, and messaging apps during the election period in Iran are vital to people exercising their right to freely express their views in a peaceful manner of their choosing, to engage in free exchange of information, and to advocate for transparency. We emphasise that such access is ever more crucial in a context where laws and policies governing elections and the media, in flagrant violations of international law and standards, impose severe restrictions — among others — on the rights to freedom of expression and political participation.

We respectfully request that you use the important positions of your oﬀices to:

● Refrain from arbitrarily blocking access to social media platforms, such as Instagram and Clubhouse, and messaging apps, and publicly assure the people of Iran that the internet, including social media and other digital communication platforms, will remain open, accessible, inclusive, and secure across Iran throughout the election and thereafter;

● Stop blocking and tampering with VPN connections, a necessary and sometimes ubiquitous tool for access to the censored internet in Iran;

● Refrain from impeding access to high-quality, secure, and unrestricted internet for everyone throughout the election period and thereafter; and

● Order internet service providers operating in the country to inform internet users of any potential disruptions, and to take all reasonable steps to fix any identified disruptions likely to impact the quality of service they receive.