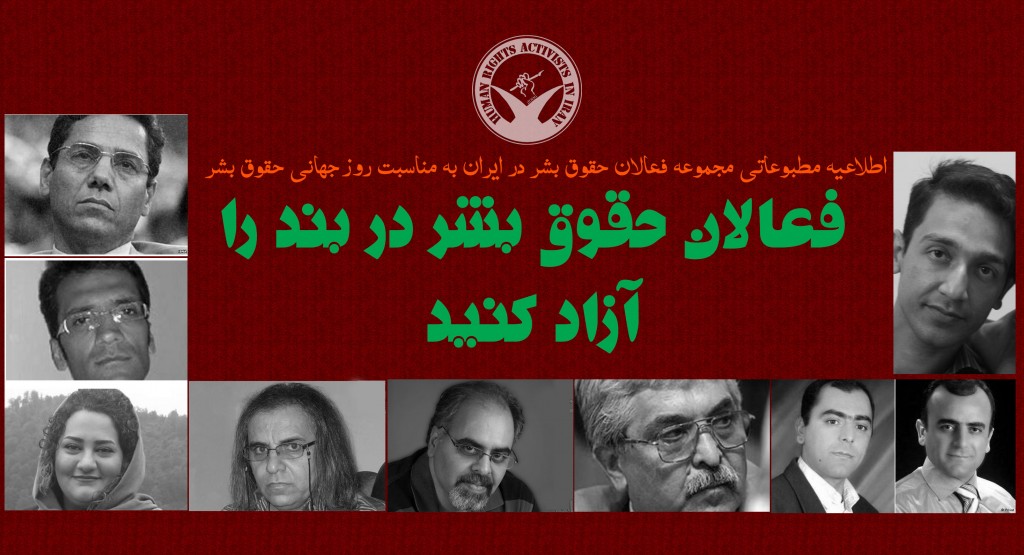 Human Right Activists in Iran has published a press statement honouring the “Human Rights Day” and urged the Iranian government to respect its commitments toward conventions and sections of human rights and to release of imprisoned human right activists immediately.

Full text of this press statement is in the following:

Universal declaration of human rights was adopted by the general assembly of the United Nations on 10 December 1948 with the target of establishing a security on equal rights and freedom for all human beings in the world. This day is being honoured globally with the title of Human Rights Day. Iran government has also among the countries which signed this declaration.

Despite adopting this international declaration for human right, due to the lack of enforcement guarantee, there has been and always will be the danger that an organization or an entity which has the power and authority can abuse its power and impose on others, especially if there are no adequate pre-empting measures in place to stop the abuse.

Because of this and the presence of human right international declarations, there are human beings around the world known as “Human Rights Activists” and they have attempted to create these pre-empting measures which can be defined in words such as democracy and access to human rights.

The 66th remembrance day of adopting the human right declaration which is honored on the “Day of Human Rights” is appraised in Iran while many Iranian human right supporters are imprisoned and serving long sentences.

The rights and the safety for human right activists have been defined by the United Nations’ statement of “Right and Responsibility of Individuals, Groups and Organizations of Society, Promotion and Protection of Human Rights and Fundamental Freedoms Trusted by the International Community” has been approved and enforced. In accordance with article 2-12 of this document, governments should take all necessary measures to gather support of competent authorities to protect everyone, individually and collectively in the face of violence, threats, retaliations, adverse discrimination or legal action, pressure or any other arbitrary action sought legitimate use them to guarantee the rights set forth herein.

However, in Iran not only there is no safety for these individuals and appreciation for peaceful efforts to instate one or more rights mentioned on human rights declaration, the government itself is the first enemy and the threat to these people.

In addition, this association demands from international societies and its foremost position “United Nations Human Rights Council” and specially the “United Nations Special Rapporteur for Human Rights in Iran” to prioritize the difficulties of human right defenders in Iran particularly their harassment and prosecution by Iranian government and to use all possible measures and facilities to convince Iranian government to stop this process while benefiting from special attention to the freedom of human rights defenders.